by christina | May 24, 2022 | Thyroid Radiofrequency Ablation

Thyroid nodules are not only diagnosed in adults but also pediatric population. Nodule development in adolescents is related to excessive thyroid hormone production simultaneously with pubertal development. Besides that, iron deficiency and the thyroid gland’s persistent overstimulation may cause benign nodule development.

There are several factors associated with thyroidectomy, such as laryngeal nerve injury, hypothyroidism, bleeding, hypocalcemia, and post-operative infection, which are significant concerns for pediatric patients. Besides that, patients who underwent thyroidectomy early in life need lifelong hormone supplementations. Thyroidectomy also causes permanent visible scarring and other dermatologic symptoms such as skin tightness, pruritus, and pain.

Multiple alternatives to surgery are available for adults, like thyroid radiofrequency ablation (RFA), laser ablation, and microwave ablation, which are more effective for patients with high anesthetic risk or those having a contraindication to surgery. The emerging Thyroid RFA treatment option has been believed to be a safe and effective option to treat benign symptomatic nodules in adults, with improved symptom and cosmetic scores and a high volume reduction rate. However, there is limited data for thyroid RFA in pediatric patients.

To determine the effectiveness and safety of Thyroid RFA for benign thyroid nodules in adolescents and pediatric patients, a research study was conducted involving 12 pediatric patients who underwent Thyroid RFA for non-functioning benign thyroid nodules in Chung Shan Medical University Hospital and Kaohsiung Chang Gung memorial hospital. All patients’ age was less than 20 years, had benign nodules, showed pressure symptoms and cosmetic problems, and there wasn’t any sonographic suspicious feature.

How Was RFA Performed On Pediatric Patients?

The Thyroid RFA procedure was carried out in an outpatient setting, and patients were injected with local anesthesia around the thyroid gland. With ultrasound guidance, an internally-cooled electrode connected to an RF generator was used. The moving-shot technique was used to ablate the nodule. The procedure ended when all ablation units changed to transient hyperechoic zones. After Thyroid RFA therapy, patients were advised to follow up after 1, 3, and 6 months for ultrasound and clinical evaluations.

According to the study, Thyroid RFA was proven to be effective in adolescent and pediatric patients. The nodule volume reduction after the final follow-up was around 74%. In addition, all patients showed significant improvement in symptom and cosmetic scores. 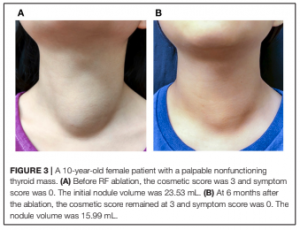 In this study, 5 patients required multiple therapy sessions because of their nodule regrowth. Multiple goiter characteristics may be related to early regrowth or incomplete treatment of thyroid RFA, such as goiter vascularity, baseline volume, anatomical relationship to the adjacent critical structures, and unclear nodule goiters.

At RGS Healthcare we pride ourselves on keeping our doctors and their patients’ knowledge of thyroid disease accurate and up-to-date. If you are interested in receiving our patient guides, feel free to contact us today at 1-407- 759-4302 or contact us today for your consultation on all the medical imaging equipment and services that RGS Healthcare has to offer you.

You can read the full Medical Journal here.

Disclaimer: None of the information posted is intended as medical, legal, or business advice, or advice about reimbursement for health care services.